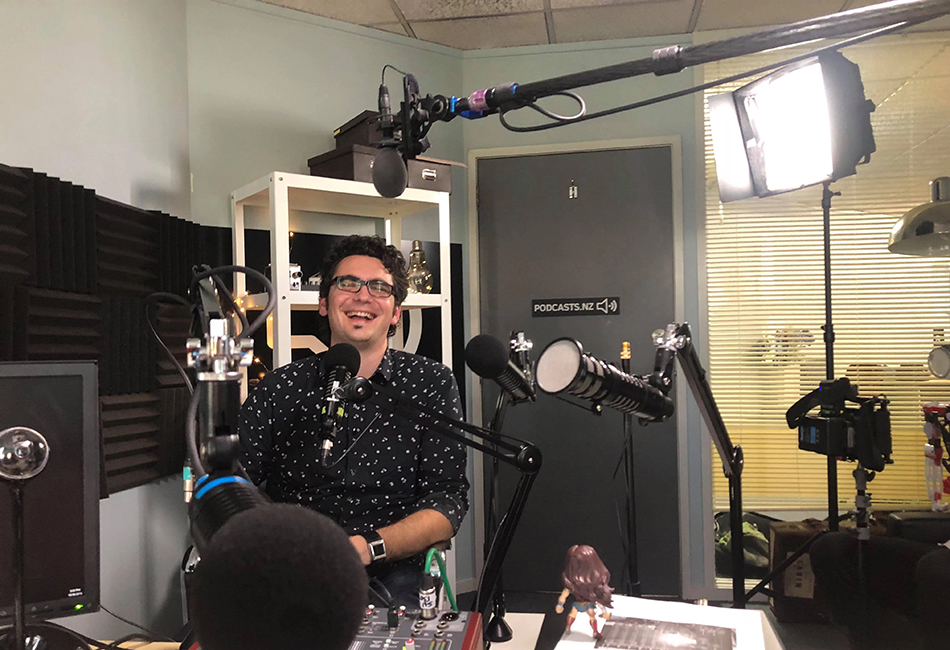 The Gap in the Audiobook Market

When Theo Gibson discovered there was a gap in New Zealand’s Audiobook market, he developed a website selling Audiobooks by New Zealand authors. As this was his first time taking on a project of this level, he contacted BMNZ to give him guidance and support on areas outside his expertise. He was paired with Ailsa Barr, who he describes their relationship as being “invaluable”.

When sound engineer Theo Gibson discovered a gap in the audio book market, he knew he could fill it.

Being slightly dyslexic, Theo had always been a fan of audio books, with regular books posing the obvious challenges.

So, when he learned that there was no one making audio copies of New Zealand authors, he put on his sound engineering cap and, using his web design savvy, got to work developing a website to create and sell NZ authors.

Just over two years later, the website – audiobooksnz.co.nz - is up and running; he has established a recording studio so New Zealand authors can create their own audio books; he has partnered with US audio book giant Findaway, giving readers access to over 100,000 audio books from around the world in several different languages, and, after many discussions with publishers, he is bringing more and more New Zealand titles to the market.

And while everything is clicking into place nicely now, Theo says it has been a long haul to get this far.

“Understanding all the moving parts, how it would work and how I would make money from it took quite a lot of time,” he says. “A lot of people had only pieces of the puzzle.”

While Theo was focused on where he wanted to go and what he hoped to achieve, he realised early on in his journey that he needed guidance and support on areas outside his expertise.

“It was the first time I’d taken on anything of this sort of magnitude and I knew there were a lot of systems to get my head around and business practices to manage that I hadn’t done before and I also needed a sounding board from someone who has been in a similar situation, who has been in online business and who I could get insights from.”

“When I had my first meeting with Ailsa, I knew she was totally on the same page as me,” he says. “I was still building the website so she was really helpful advising me what to focus on and how to structure negotiations with people.”

Theo says while many things had changed since Ailsa had her online business, the principles were much the same.

“Ailsa knew what it was like to work with developers and the best way to structure my pricing,” he says. “At the time, I was negotiating with Findaway and looking at getting their catalogue, so she was able to offer good advice, as she had been through it with her own online business, so that was very valuable.”

Theo also needed help with “basic accounting stuff” he hadn’t had to deal with much previously, such as how to pay contractors and structure invoicing, alongside the day-to-day financials of running an online business.

“I also needed to get systems in place so I could get newsletters out and to work out what was important to focus on.”

Ailsa says Theo came to her well prepared with MYOB already set up and a cashflow forecast.

“I’d never had a start up with a cashflow forecast before, even if it was ‘somewhat optimistic’, she says.

Ailsa worked through several issues with Theo, including how best to allocate his time while he was working part-time and formalising his partnership with Findaway.

Because of the nature of the project, Ailsa also became the mentee, seeking help from other mentors on registering as a tax entity in the US, and at a later date to discuss alternative funding sources.

She says Theo has been one of the most rewarding mentees she has worked with.

“He has so much enthusiasm, is so focused, clued up and on to it - he’s a fantastic guy to work with.”

Theo says having a mentor to talk “even the basic things” through with has been great, especially when he’s feeling overwhelmed.

“There’s so many things to do, it’s hard to prioritise - and there’s only one of me. There’s just so much going on as a solo person plus I have a family to feed, so having someone to point you in the right direction who understands where you are at in those trying times can be really helpful.”

He says it has taken time to understand all the moving parts of his new business, how things would work and how he would make money from it.

“But we’re nearly there - we’ve got our sound studio up and running in Epsom, people can now record their books and we can distribute them. We’ve just released an IOS app, we have an Android app following and, at the same time, we’ve been making a lot of books, with three titles about to be released.

“There’s a ton of features I’d like to add to the service. But I’ll roll them out over time as money starts coming through.”

1. Work out your administration systems early on email, calendars, filing and accounts. I currently work part-time; run my start-up business and produce and co-host a weekly podcast about Sustainability and Electric Vehicles. If I didn’t have my systems in place, I would rapidly become overwhelmed and not be able to move forward.

2. If you are shying away from doing something that is probably the most important thing you need to tackle first. If you get stuck ask for help. Ask a mentor, a family member or a friend. Even If they do not answer your question fully they will most probably give you an idea of who to talk to next.

3. When working with developers building a website, app or piece of software, have a good overview of what you are trying to achieve. Be as descriptive as you can and don’t ask for the impossible. If you can’t explain it to your developers, how are they going to build it for you? Also, don’t forget to ask your developers for advice. At the end of the day if you treat them with respect and have a good working relationship, they will do everything to they can to help you project succeed.