And she can’t praise enough the advice and support she has received from Business Mentors New Zealand (BMNZ) and her mentor Malhar Panchwagh.

“BMNZ have been so helpful and I could not be happier with my mentor,” she says. “I would encourage anyone in business to consider getting a mentor.”

Elizabeth is just about to launch her sweet and savoury slices under the brand GG’s baking company – GG being short for Gran Gran, the name bestowed on her by her grandchildren. 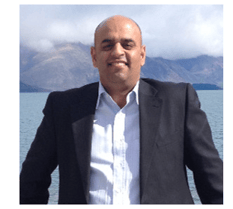 She says she was “so lucky” when BMNZ found her Malhar.

“He hadn’t been mentoring because he was so busy with his own work, but he’d just decided to take on another mentee,” she says. “And they couldn’t have found anyone better for me.”

Elizabeth has a long history in hospitality, starting nearly 54 years ago as a 14-year-old washing dishes in a restaurant. She spent many years working within hotels, restaurants, bars, catering, and summer camps to pay for her university fees.

The real turning point in her career came when she was studying for her Ph.D. and had the opportunity to work at Cornell University, teaching within their world-famous hotel school, eventually staying on for 16 years. During that time, she did her Ph.D. research at a hospitality consultancy firm in New York City where she learned about the financial side of business, which was when her focus on hotels really started. This included training for hotel companies around the world, including a seven-year stint in Paris, in Accor hotels throughout Europe and the Middle East, and then, when Cornell opened a programme in Canberra, Australia, Elizabeth headed there to open that school in 1995.

“Then I met a Kiwi and I moved to Auckland in 2001 where I became Associate Head of School of Hospitality at AUT,” she says.

“While Cornell had a good culinary programme, they were really more famous for management,” she says. “When I was at AUT, I was responsible for 32 chefs, 19 kitchens and two restaurants, so I learned a lot about the training of chefs through that role and that’s when I really went into senior administration.”

Elizabeth “retired” two years ago, but not one to let an opportunity pass by, she has replaced her administrative cap with a chef’s hat, pursuing her long-held passion to start a small foodline business.

In February 2021, that passion will become a reality when Elizabeth’s homemade slices will be trialled in cafes at AUT.

Despite her extensive hospitality and budgeting background, Elizabeth has never started her own business before, so instead of being the teacher, she reached out for assistance and was delighted to discover the BMNZ mentoring service.

“I knew I would benefit from a mentor,” she says.

Initially planning to sell her slices in the retail market, her mentor Malhar instead encouraged her to consider wholesale.

Malhar is currently involved in a food manufacturing and distribution business working within the foodservice and retail markets.

“There were some clear advantages for Elizabeth to go into the foodservice channel, because there’s a lot more that you need to do when you go into a retail environment, such as packaging, advertising etc” Malhar says. “To have a product retail-ready would have taken a lot more time and money , and at the same time, I thought there would be more opportunities for her in the foodservice channel where customers are more open to trying unique food products such as hers and that’s why I thought that should be our first strategy. It is always easier to enter the retail market once you have shown proof of concept and that there is demand for your products”

While friends and family have loved her slices for the past twenty years, she knew she needed to gain feedback from further afield. Working with an AUT chef, the pair refined her recipes - which also come in gluten-free versions - as well as receiving evaluations from students.

Elizabeth is eternally grateful for Malhar, her Mentor’s advice.

“He’s been in foodservice and he understands using commercial kitchens, has tremendous contacts and has been so helpful to me and so generous with his time and advice. He has asked some absolutely brilliant questions; he’s a very thoughtful man and you can tell between our meetings that he has given a lot of thought to what my current issues are.”

She says at this stage of her career and life, she didn’t want to make big, obvious and costly mistakes.

“You think a product is wonderful, but that doesn’t mean everyone else does. I also didn’t want to rush in and hire a marketing firm and then not get the slices into grocery stores, so I just wanted to make sure the process made sense and that I was being strategic, so I sought advice because I was really aware this was not my area of expertise.”

“I would’ve made some very serious mistakes if it wasn’t for Mal – I probably would have put all my energy into trying to do retail, whereas this other approach makes a lot more sense.”

“There are lots of people doing really cool stuff in food, she needs to tell her story, what it is behind the product and why she wants to put it out there.”

“Prioritising which customer base she wants to go with first and how she portrays her story is critical, because her customers want to hear her story, especially at this time – when they want to support local businesses who have a purpose and a meaning.”

Elizabeth plans to give a percentage of all profits to develop culinary scholarships for students who might not have the means to study culinary arts.

She is delighted everything is coming together and that she can leave a legacy to her grandchildren, passed on by her own mother, who she says was a “brilliant” baker.