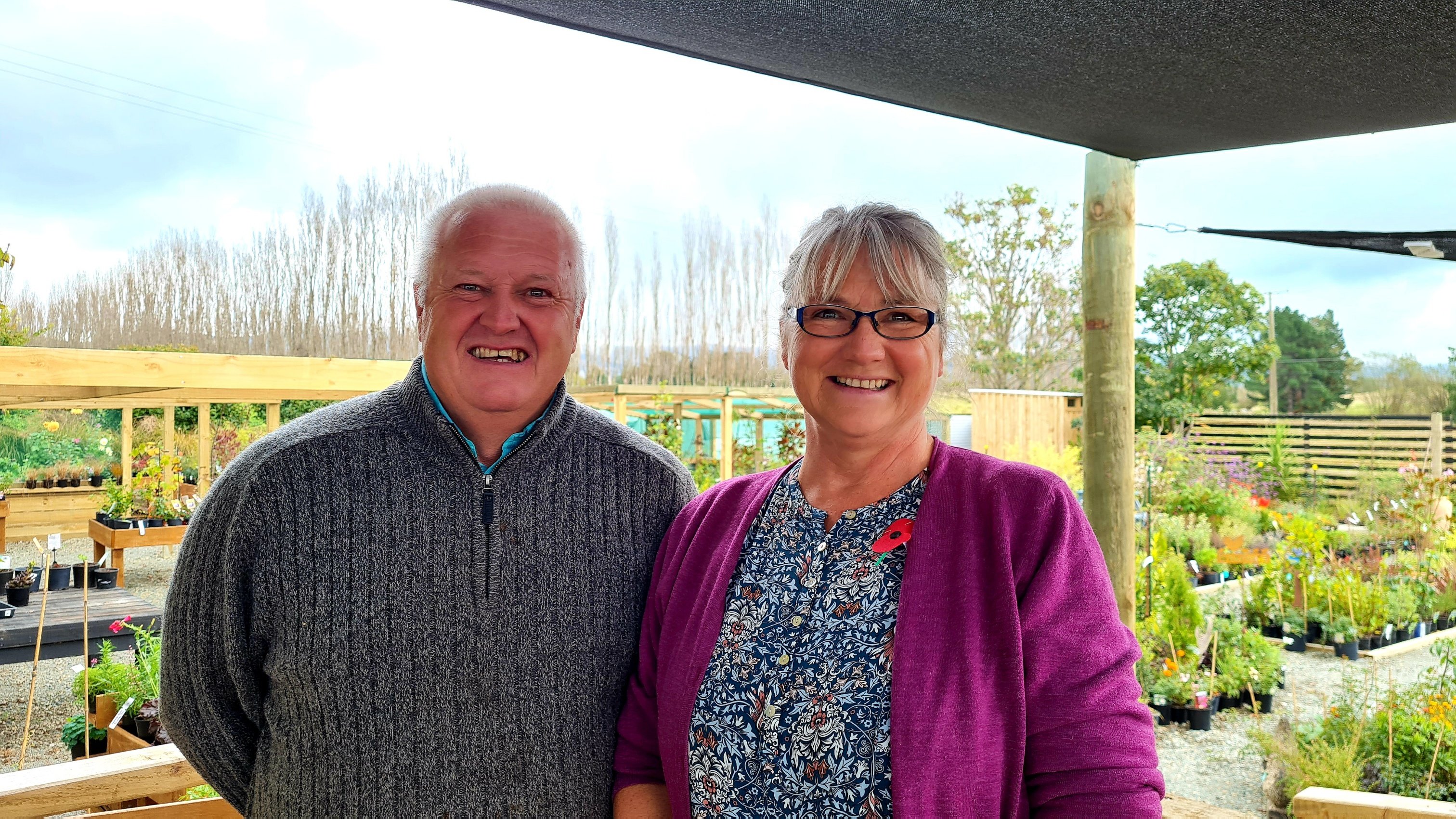 A seed of an idea

Waimate’s Back Paddock Garden and Gifts was just a seed of an idea seven months ago but has quickly blossomed into a thriving business.

Steve and Janet Fox’s back paddock was part of their two-acre section occupied only by long grass, and occasionally the neighbour’s sheep when they wandered in.

Janet and Steve were both registered nurses working in community and mental health when they decided on a lifestyle change, founded on Janet’s long-time love and knowledge of plants.

Just eight months on they’re the proud owners of a blooming garden centre.

“We had been here for eight years and Janet always wanted a garden centre, so we made a start,” says Steve. “The first thing we did was fence off the back paddock to set the boundaries for the garden centre – and keep the sheep out. It took around 4.5kms of timber railing.”

Steve and Janet not only wanted a garden centre but also a gift shop and a coffee service. However, while the ideas were flowing, having not been in business before, the pair realised they needed an experienced hand to guide them.

After contacting Business Mentors New Zealand, the Foxs were matched with Timaru-based mentor, Rex Knowler, a 30 year veteran of the insurance industry who had worked for a large company before setting up his own business.

“When Rex came for his first visit, it was cold and rainy, and we stood there looking out at the back paddock, which only held a few tables, and we told him about our vision. He immediately got what we were trying to achieve,” says Steve.

“Logistical planning and bringing all the facets together was where Rex really helped us. He would question our thinking behind what we wanted to do and was a really good listener and sounding board. We didn’t always agree with his ideas and he didn’t always agree with ours but they were always the basis for a really good conversation, with positive outcomes. He would challenge us to fine-tune and test our ideas, making sure we had researched things thoroughly.”

Progress on Back Paddock Garden and Gifts moved forward rapidly. Initially, the plan was a garden centre and a gift shop which Steve planned housing in the old horse stables, but once shipments of gifts began to arrive, it became obvious it wouldn’t work. So a new purpose-built shop replaced the leaking stables.  The planned coffee caravan was incorporated into the gift shop. As the weather cooled, coffee and cake needed to become pies and other hot food.

“The business kept evolving. A customer said to us one day ‘if you sold pies, I would come here and have a pie’ so we got our full food license and started providing hot meals which have been hugely successful. It is lovely to see people outside enjoying the fresh air and the surrounds. We even get local businesses coming down here to have meetings in the relaxed setting,” says Steve. “Our customers are on the journey with us – they often comment on something new we’ve done or make little suggestions which we always listen to.”

As nurses, Steve says he and Janet have good critical thinking skills and were constantly assessing what was happening and viewing it from different perspectives – just as you would with a patient.

Janet, Steve and Rex grew together on the rapidly expanding project. “Each week or so we’d sit around the table and talk about which path we would go down. Rex was so enthused – he would drop in on surprise visits to see where we were at and be blown away by what we had achieved since we last caught up.”

Rex, who has been mentoring businesses for the last six years, said that his 30 years in the insurance industry has prepared him well for the next phase of his life. “After working with businesspeople and hearing about their challenges and how they overcame them, I have learned a lot about potential issues new business owners may face. So becoming a mentor was a natural progression once I had retired from insurance.

“Working with Steve and Janet has been incredibly satisfying. Not having been in business or run a nursery before didn’t seem to phase them. There were so many unknowns but they focused on the creation of their dream and not so much ‘what’s going to happen next' which kept things moving along well.”

Rex brought his business acumen to the table and was able to help with not only the big picture but some of the everyday things such as pricing and cash flow.

He says the couple have worked like Trojans to get the business up and running. “I’ve really enjoyed the whole journey with them – not just because it’s been super successful but because of the way they’ve gone about it and the people they are.”

Rex had so much faith in the business that he thought they were worthy of entering the Emerging Business Award in the South Canterbury 2021 ARA Business Excellence Awards. Despite only having been in business for four months when they entered, Back Paddock Garden and Gifts became the youngest business to ever reach the finals and were runner up in the People’s Choice category.

When Steve and Janet reflect on how they got to this point in their business, they pin Rex in the centre of it all with his mentoring. “I believe if we didn't have Rex checking on our progress and checking our ideas and plans, we probably would have ended up looking much different especially with my madcap ideas! We are super lucky to have had a mentor right from the start – Rex has been amazing.”

Back Paddock Garden and Gifts now stocks thousands of plants, from veggie and flower seedlings, shrubs and roses to climbers and native trees. The gift shop is overflowing with delightful gifts for every occasion and with a coffee, you get great conversation and gardening tips from the pair.

But they’re not stopping there. Plans are now underway for the front paddock, soon to become a strolling garden and picnic space where visitors can enjoy a range of beautiful specimen trees and flowers.

Advice from Steve and Janet: